AquaKlear is an all in one system that is made from concrete in most cases, with some being fiberglass. They have been in business since 2004 when they first received their NSF certification. The design was meant to be a little different as it has a skimmer for the clarifying area of the system. This is supposed to give a higher quality effluent than the other systems that are similar in design. It is similar in design to the Jet system but uses a different method of aeration. With these system types, it doesn’t really matter who you use as far as the manufacturer, what matters is the installer.

The AquaKlear or AK not to be confused with AK INDUSTRIES, the maker of hydro action. Was a new take on the all in one with a skimmer device that was supposed to skim the top of the settling chamber where denitrification produces a soft mat of organic material in most systems. It uses a dual-port blower Hiblow model to achieve this using an airlift method to skim the top of the water and put the skimmed material back into the aerobic chamber. Well, guess what, it doesn’t work. I have never personally seen it work in all the systems I have pumped. The piping comes too lose or something happens to the blower and it really is just a hassle. Overall the system is very structurally sound we haven’t seen one that is damaged or in cracked so they are well-made systems.

It might very well work for 6 months that NSF is testing it but in the long run, it doesn't we advise clients to toss that blower when they can’t be rebuilt any longer. And just get an 80-model pump with angle outlet. Hiblow HP-80, Fujimac 80r2, a Secoh Jdk-80 or EL-80 will work great. All you have to do is hook it up to the main airline that goes to the aerobic tank of the system, not the line that goes to the skimmer.

Other than that, it’s a great system it will do what every other all in one system will do. It’s not a knock on the owners it was a good idea it just doesn’t work and we have seen quite a bit of them there is another system that uses this feature as well and it doesn’t work either. It was more than likely a, I want a patent to say I have one thing and not a real practical thing, to begin with. A lot of that goes on in the industry and it's pretty amusing, to say the least. I have had guys swear they work and this and that I'm going off pumping thousands of systems and repairing thousand when I say this. A lot of guys say stuff and they install 8 systems a year we do that in 2 weeks. 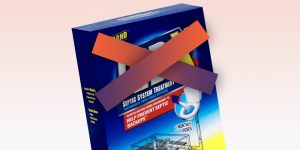 Do Septic Additives Work? For septic systems owners, proper maintenance can mean the difference between a

Aerobic Septic System© 2023
Aerobic Septic System is your go-to source for all septic repair and installation information. Whether you're looking for advice, support or tutorials - you've come to the right place!
FOLLOW US
Privacy Policy • Terms of Service