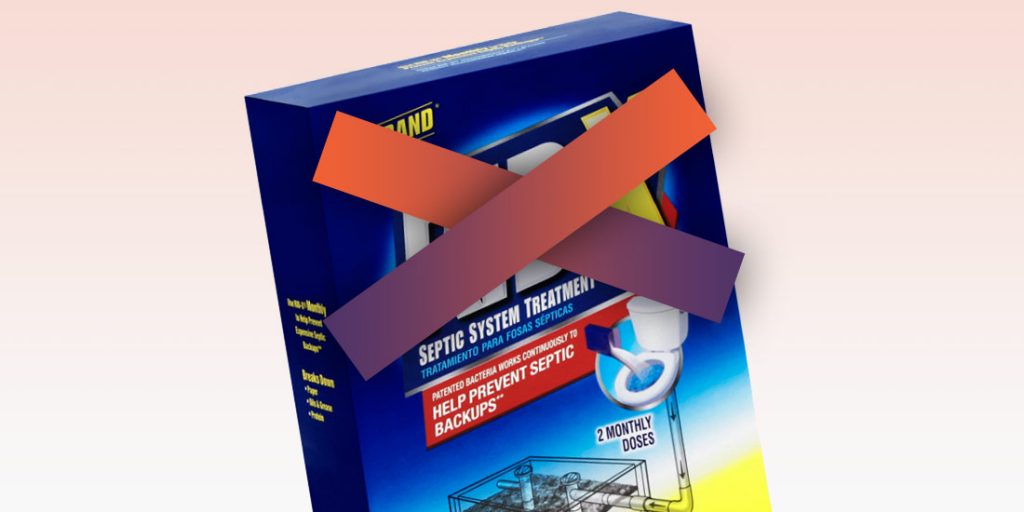 For septic systems owners, proper maintenance can mean the difference between a long-lasting, trouble-free system and one that ultimately racks up thousands of dollars’ worth of problems.

Many private companies offer a solution: using low-cost septic additives on a regular basis reduces the need for costly pumping.

So what’s the truth? Does it work?

It is all Garbage.

There is no scientific, engineering, academic, or government source we’ve talked to that recommends the use of septic system additives. I personally know a partner at the most respected water and wastewater engineering firm in the world. They have designed some of the largest wastewater treatment plants in the world and they basically invented wastewater treatment as we know it today. These are the people who design massive engineering feats; 500-600 million gallons per day(gdp) treatment plants with pumps bigger than your house. He says we’ve been experiencing one of the greatest marketing scams ever.

Here is why bacteria additives are junk and a scam.

-Most of these products recommend treatment every 30 days.

The bacteria don’t live for 30 days. They may produce more of eachother but don’t love that long

-The system always has the balance of bacteria it needs.

As waste comes in, the bacteria propagate and become more abundant. When less waste or food is supplied, the bacteria begin to eat each other. That’s right, they are cannibalistic. That’s how the balance is kept in the system. Adding more bacteria to the system will only be giving food to your existing bacteria

When reading the many disclaimers and “lawyer speak”, you will find that they, themselves, say the very same thing. A popular additive on tv says all those things within their fine print. They go on to disclose, at the bottom, “With regular cleaning and pumping”. No indication is given as to how often that may be.

A well-known company that runs ads on tv claims that “tests we ran, conducted by a university, showed less sludge.” This is inconclusive as no test parameters are indicated. i.e.: a vacuum or pump service could have been performed periodically during the test, which may or may not be reflective of the average consumer conditions. In that type of dest, dirty could be used and incur the same or similar results

In homes with septic systems, when the toilet flushes or the washing machines runs, wastewater leaves the home and collects in a septic tank. There, the natural bacteria in the waste break down most of the solid material into a liquid or gas. Heavy solids, bits of plastic, or other material that can’t break down drop to the bottom of the tank and form the sludge layer. Lighter substances such a grease or oil float to the top, creating a scum layer. From there, the relatively clear liquid in the middle of the tank, called effluent, flows to the aerobic chamber for further treatment over 24 hours. It then flows into the pump tank where it’s pumped out into a drip or a spray, or just gravity fed into the drainfield that surrounds the tank, It’s a relatively simple and natural process.

Septic tank additives (also called septic tank treatments, cleaners, restorers, rejuvenators, or enhancers) fall into two categories; chemical or biological. Chemical additives are marketed to open up clogged drains and to break up grease and oil. They include active ingredients such as sulfuric acid. These can be highly corrosive and cause structural damage to your septic tank and kill the bacteria.

Biological additives are made from bacteria, yeast, and/or enzymes. They are said to work as starter agents in new systems. This is news to us, as we’ve installed over 3,000 aerobic systems without ever using an additive or ever needing one. The companies also say it gives an increase in the efficiency of breaking down the solids in existing systems. Again, and I have personally inspected over 4,000 systems in my time in the industry, I have never seen this to be true. Biological additives are often sold as routine maintenance to be flushed down the toilet on a monthly or weekly basis to assure the septic system’s “balance.” We find this untrue and, at this point, comical. The system has an innate balance to it without any additives.

Most chemical additives, which clearly harm septic systems and the environment, are no longer marketed. Biological additives are mostly benign, but still unnecessary. They’re just concoctions with some bacteria in them being sold as a solution to a bigger underlying issue.

The biggest issue is that people simply don’t know how the process works and get bad information on the systems themselves. The process is a natural biological process that does not need anything to help do its job.

Of particular concern is the claim that some products reduce or eliminate the need to pump the septic system on a regular basis. This is a major issue that,  as a septic company,  we face every day. Some of it is the homeowners’ fault and they simply will not listen even if they’ve been told by ten different people. They’ll swear up and down “it’s fine, it’s never been pumped in 20 years it’s supposed to be like that.” When they do start having issues it’s often too late; the field lines are shot, the tank is literally a solid mess that takes hours to pump. Then they have regular issues with the system and are repeatedly calling us asking why they’re having issues. Pumping solids out of the tank is a vital part of septic system maintenance. Encouraging homeowner to not pump their tanks will have costly and disastrous effects on their systems down the road. Some brown powder is not the answer.

If wastewater is entering a septic tank, solids will be present. Period. End of story. The job of the trash tank is to keep as many of the solids in the tank(retention and settling) and to not let them move on to the next treatment process. This is often an aerobic treatment tank, a drainfield, or a pump tank. If a product claims the reduction or elimination of the need to pump it’s a flat-out lie. I would ask where then do the solids go if they’re no longer in the tank? “The bacteria ate them” okay, well the bacteria have waste also. Mass simply does not vanish. It can be broken down and filtered etc. But this happens naturally in a tank and does not require any magic powder you’ve poured down the toilet. For the cost of this powder, you can pump your system more often than is necessary and ensure the longevity of your septic tank.

What The Government Says

The state of Washington does not allow additive manufacturers to use the word “approved” for marketing purposes, but product materials may say “complying with Washington laws regarding harm to public health and water quality.” Other states may have similar or differing regulations and consulting your local authority is recommended.

What The Research Says

A lot of research is needed in this area but has already been done by most of the big engineering firms. If there were a better or faster way to treat waste they’d already be doing it. Not only is this of interest to practicing professionals in the on-site wastewater field, but also to many homeowners that waste a lot of money on these products.

In 1997, Dr. Hoover directed what has been called a “landmark” study by then-graduate-student Gregory H Clark. Using 48 septic systems in two mobile home parks, Clark set up three groups of tanks to receive additives and one to act as a control. The tanks were divided into groups that had been well-maintained(recently pumped), poorly maintained (rarely or never pumped in 15-20 years of use), and those that fell in the middle. The primary researcher collecting and analyzing the samples from the tanks did not know which tanks had been treated, and the study received no funding and had no involvement from the septic additive companies. The three products tested were from Drano, Liquid Plumber, and Rid-X.

Various measurements, such as the depth of the sludge(solids), the thickness of the scum, the number of floating solids, and the total amount of bacteria present in the tank were collected over the period of a year. The study concluded that “the additives tested did not provide any substantial or long-term statistically significant benefits compared to the control” for the items that they measure and in the conditions of this study. The authors also called for continued research under borders circumstances before “definitive conclusions” could be drawn. This study is published in the January 2008 Journey of Environmental Health

A second unpublished field study of bacterial additives done by the National Association of Wastewater Transports, Inc (NAWT) followed 12 septic tanks for two years. They similarly concluded there was no change in the sludge accumulation at the bottom of the tank or in the number of floating solids. They did find a 30% reduction in the floating scum layer; a statistically significant finding. However, they also found an increase in fats, oils, and grease in the septic system outflow to the drainfield, which could cause other problems. The NAWT concluded that the additive seemed to have no detrimental effect on the septic systems, but does not hold an “opinion, positive or negative, as to the use of bacterial additives in the septic tanks.”

Our conclusion is this: you have been duped and it’s a sad thing because they have built an entire industry on these additives. Some of these ideas come from the chemical plants there additives work in the chemical process and they add certain bugs to things. These are not the same bugs or additives, this is not a chemical process but a biological one, and one that needs no help to happen. Save your money for a pump out. The cost of additives for one year is about the same as a complete pump out in most areas so it’s cheaper to do it right. Get your tank pumped!

Aerobic Septic System© 2022
Aerobic Septic System is your go-to source for all septic repair and installation information. Whether you're looking for advice, support or tutorials - you've come to the right place!
FOLLOW US
Privacy Policy • Terms of Service